The Red Canoe: Love In Its Making 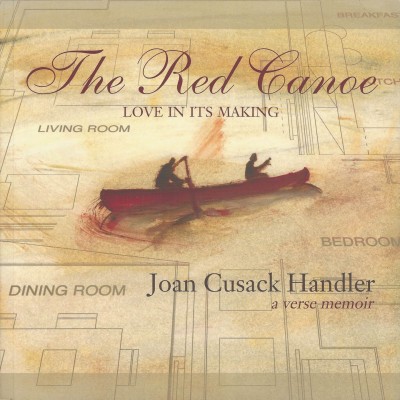 The Red Canoe: Love in Its Making is a verse memoir that explores the anatomy of a marriage–underbelly and crown. A practicing psychotherapist and former marriage therapist herself, Handler unveils the multileveled role of parents, children, religion, illness and the emotional/psychological of the two spouses on the frail and treacherous terrain that is marriage. Her gift and that of this book is that she manages a balance of perspectives, one identifies with and empathizes with both spouses. paramount for them, as for all married couples are their primitive conflicting needs to merge and to remain separate. Though poetry, Red Canoe reads like a novel…. A must read for couples, Red Canoe is also a valuable clinical tool. A graceful blend of her experience and wisdom in two professions–poet and psychologist–Handler offers her readers the gift of her honesty, her unflinching commitment to tell the whole story and her trust in the power of hard work in the making of a love-filled and trusting marriage.

From The Red Canoe:

Praise for The Red Canoe

The Red Canoe is a work of tremendous metaphoric complexity and richness, in which a woman’s pain – braided into a troubled marriage, branded upon an injured body – ultimately finds relief in the transformative power of language. Joan Cusack Handler’s dual guises as therapist and poet merge as one in this healing book which, in the end, is an articulation of a keen intellect animated by heart and hope.

When I began to read The Red Canoe... I wondered about the bizarre shapes and halts of the words and ...letters on the page. Slowly, their meaning visited me. These poems invite their reader into private, hidden, unutterable spaces—the cul-de-sac behind the cervix, the gaps between adjoining vertebral bodies, the marriage bed. What courage it must take to see with this dramatic, piercing gaze. In acts not of anatomy but of vivisection, the blade of sight cuts through skin, fat, fascia, down to bone. Handler finds the most fundamental elements of that which is caught in her net—the cruelty of Catholics and Freudians in their ...unforgiving sneers at their deepest selves, the remote but tender silence of the grey-eyed husband who can only steal looks at his wife, the possession so intense of the son that it can only be rendered in prose.

Love here exceeds its bounds. Spilling over into body, food, sex, childhood, appetites, ideas, and pain, the poems achieve a brilliant fusion of the particular and the universal, the seen and the undergone, the body and the self. We are lustier, brawnier, better-fed beings for the prospects of Handler’s gifts.

In The Red Canoe: Love in Its Making Joan Handler brings both honesty and balance to the intricate world that is a marriage. Her means are consistently inventive as her lines enact feelings and thoughts. Her focus is unremitting as she makes the reader feel how much pain and glory can go into two people trying to accept one another. This book is unmistakably poetry but has the feel of a novel – one wants to know what will happen to these people.