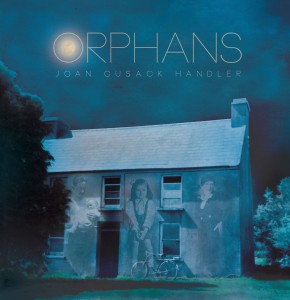 I’ve been a psychologist in clinical practice for more than 30 years. Not surprisingly, I’m also a writer who focuses on the emotional and psychological underpinnings of human experience. Committed to meticulously preserving client confidentiality, I never use client’s biographies in my writing; I restrict myself to my own. Hence all four of my books may be considered one biography—focusing on different stages of my psychological life. And because poetry is about discovery, as I reveal myself to my reader, I reveal myself to me.

My most significant discovery in all of my books came with Orphans. Originally entitled Orphaned, I changed the title because I felt that Orphaned sounded whiny and like I was soliciting sympathy. It also restricted itself to me instead of describing generations of people, ultimately all of us.Orphans started out as a tribute to my parents; I was committed to writing their stories after their deaths. In fact, my mother instinctively knew that I would, and laughingly said one day when the mood was graceful and loving between us “…you’ll tell the truth, Joan, even about the bitch I can be.”

Not unlike most sons and daughters with aging parents, I became much more involved in their lives and their care as the years passed. The natural accompaniment to that was that I wrote more about them than I had before. And because my writing reflects what is going on in my life, their illnesses found their way into my poems as did their thoughts and behaviors, my memories, observations, and conclusions.

My mother was the first of my parents to die; that was twelve years ago. I had little time to grieve her because my sister and I immediately set about tending to our father as he tended to himself—cooking, baking bread, vacuuming the living room– and dealt with her loss. Several years passed and a fall in his bedroom sidelined him from most of the things he most valued in life—going to Mass, reading his prayer books, ‘baking the bread’.  The second fall broke his hip. It happened in my home in East Hampton.

Hospitalized in Southampton Hospital, he came through surgery fine, but died within days of pneumonia.

My sister and I and even our estranged brothers were devastated. His loss left a huge hole in my life and my heart. I adored him as did everyone who knew him. I loved talking to him, listening to him—his stories, his wisdom, his wise cracks; I loved making soup for him. His loss was huge, my grief relentless–far reaching and spread over my whole life and family. I became depressed and terrified. Loss became synonymous with terror. I was obsessed with death—his first, then my own. My life diminished to a thin slip of days –the loss far more than the loss of my father. It signaled for me the imminence of my own death. I felt stripped, stalked. My days became very dark and one slid into another without notice. Weeks went by, months, years. I felt alone in a way that I had never felt before. Though I had fancied myself independent of my parents for over 50 years, I felt abandoned by my father. How could I live this life without him?

I was on my own. Despite the closeness and attention of my husband and son and his wife, I felt like I was out there at the end of a very long jetty alone. My life was ending.

I was an orphan—a daughter without parents, no longer blanketed by my father’s love but stripped down to myself alone. What would life be without him? Death was around every corner.

In the beginning I avoided my notebook. I couldn’t write. I was terrified of my notebook. What it would force me to say.

Eventually I picked it up, opened it and wrote– for a few minutes. Weeks, months later, I’d return for a slightly longer time. Twenty minutes. Never more than an hour. I filled one notebook and started another. I made poems of these entries. The poems became the body of the final 20 pages of Orphans. My death terror was finally in writing.

As I do in all of my work, I studied my symptoms in an effort to fully understand what was happening to me. What emerged was a picture of a woman orphaned in her seventies. Vulnerable again in ways she hadn’t been perhaps since childhood. No longer protected. No longer shielded from death. But exposed, threatened. Amazingly, this was a stage of life that I hadn’t heard of. The loss of my parents, yes, the obvious grief and sadness, of course. But the terror? The obsession with my own death? No. For these I was completely unprepared. I had never heard of this before. No psychological theory explained it or predicted it. Professors didn’t focus on it—fellow clinicians didn’t speak of it. Had I missed recognizing this vital stage in my psychotherapy work with clients? I couldn’t think of any, but I understood more deeply what seemed like a friend’s prolonged grief (several years) after her mother died and another’s inability to move into the house her father had lived in and willed to her. I Googled ‘orphaned in adulthood’ and found a few references there.

Fortunately for me, I had the poems. Committed to the truth, I wrote what the poem knew and wanted me to know. It took the poems and the finished book to pull me out of the depression I was arrested in, and it turns out that my project resonated.  “My husband and I often say we’re orphans,” friends told me. “The loneliness was the worst part and the feeling unprotected,” others said. I felt strangely validated and gratified.  If we are not now already orphans, we’ll someday all be—in this together.

This essay originally appeared on the blog Girl Who Reads.

In Response to “In the Dry Months”: A Review of Orphans